The future of the Euro-Mediterranean security dialogue 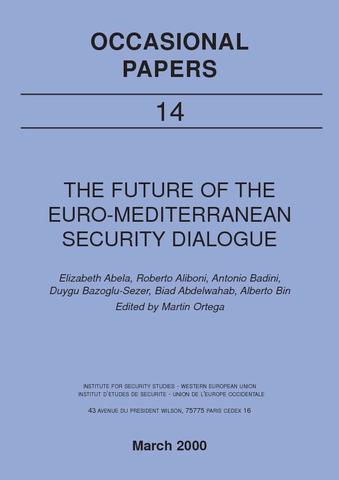 The WEU Institute for Security Studies organised a seminar on ‘The future of the Euro-Mediterranean security dialogue’, on 13-14 January 2000 in Paris. The purpose of the meeting was to discuss the possibilities of enhancing the Euro-Mediterranean Partnership’s political and security chapter, including the establishment of a military dialogue within the Barcelona Process. The seminar also tried to assess the contribution that WEU’s Mediterranean dialogue might provide, in the wake of the acquisition of WEU functions by the EU, and the synergies that will have to be found between the EMP’s new security dimension, and NATO’s Mediterranean dialogue.
Participation in the seminar was very varied. Senior officials from the Barcelona process, international civil servants from the EU, NATO, OSCE, and WEU, high-ranking military officers, all of them acting in a personal capacity, and academics, from the EuroMeSCo network and elsewhere, were invited to discuss the proposed subjects openly and frankly. Following the usual practice, the Institute tried to strike a balance between officials and academics, and to obtain a wide geographical representation. In the end, participants came from nine WEU or NATO member nations, and from five Mediterranean countries.
The programme of the seminar, which follows this preface, gives an idea of the subjects addressed and the contents of the debates; a list of participants is also included. This paper contains the written contributions to the seminar, in their original language and in the order that were presented, as well as some concluding remarks in English and French by the editor. It must be underlined that all contributions represent the authors’ personal points of view, and not necessarily those of any state or organisation.