A failed uprising in Bahrain 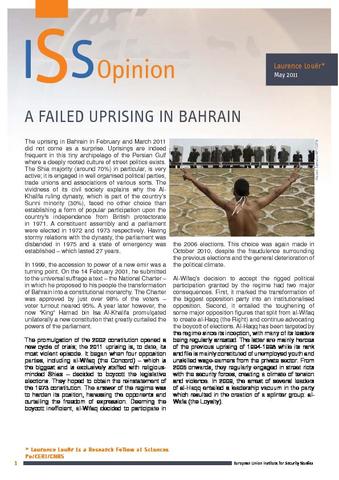 To date, the Bahraini uprising has resulted in nothing but a return to martial law and the possible end of the participative experiment. This failure was predictable. At least three reasons can be put forward. First, the protestors were divided about the aim of the movement, so al-Wifaq’s attempts to engage in dialogue with the regime were sabotaged by the hard-liners of al-Haqq and al-Wafa. The main loser of the uprising is al-Wifaq, whose efforts to transform into a party that collaborates with the government have been nullified. It risks not only becoming a banned party but also losing credibility in the Bahraini public.

A second reason for the failure is the internal factionalism of the ruling dynasty. The Al-Khalifa family has always been deeply divided about the all-out reform process initiated by the King, which includes not only a modest political liberalisation but also economic reforms aiming to attract foreign investment to boost the private sector and to solve the endemic unemployment problem. These reforms not only go against the pessimist position of the old guard about the possibility to ease the tension with the opposition by establishing a measure of political freedom, it also directly hurts the economic interests of some leading figures of the dynasty.

The third reason for the uprising’s failure was Bahrain’s dependence on its Saudi neighbour. It stems from both a constitutive sense of insecurity the Al-Khalifa dynasty has in front of its restive population and a de facto economic dependence. Since the withdrawal of British troops from the Gulf in 1971, the Al-Khalifa family sees the Al-Sauds as the last guarantor of its political survival. Moreover, since the near depletion of Bahrain proper’s oil resources, the major part of the Bahraini state budget has come from the Abu Safa oil well, of which Bahrain and Saudi Arabia share sovereignty but which is entirely controlled by the Saudi Arabian American Oil Company (ARAMCO). In this context, when the Saudis reached the conclusion that the uncontrolled Bahraini uprising could spread throughout the GCC and even to their own territory, they knew they had the means to impose their own way of managing the crisis on the Bahraini rulers.