The European Union and the United Nations — Partners in effective multilateralism 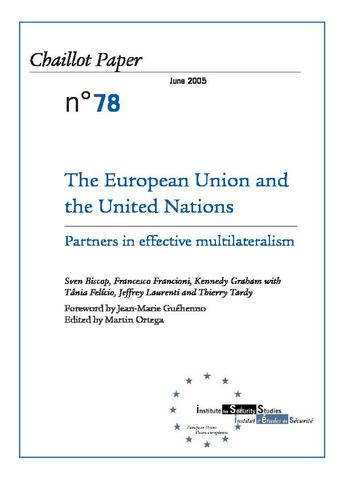 This Chaillot Paper offers some ideas on how the European Union and its member states can contribute to the reform of the United Nations, a theme that will be high on the agenda during the celebration of the UN's 60th anniversary in autumn 2005. Five experts write on the following subjects: security and development (Sven Biscop), human rights and protection of the environment (Francesco Francioni), peacekeeping (Thierry Tardy), UN Security Council reform (Jeffrey Laurenti) and regional organisations and collective security (Kennedy Graham with Tânia Felício). A conclusion draws some lessons from the various chapters and suggests that the EU should be more involved in the UN reform process. Relations between the EU and the United Nations present a mixed balance sheet. On the one hand, the EU and its member states share a common language and common objectives with the United Nations. The EU is actively cooperating with the UN on a whole range of issues: development, human rights, protection of the environment and peacekeeping, amongst others. On the other hand, however, the EU and its member states have failed to seize the symbolic opportunity of the 60th anniversary to define a common vision for the future of the organisation. More specifically, instead of negotiating a common position on UN Security Council enlargement - one of the key issues - the Europeans have shown profound divisions.

The G-20: a pathway to effective multilateralism?