The European Union and the crisis in the Middle East 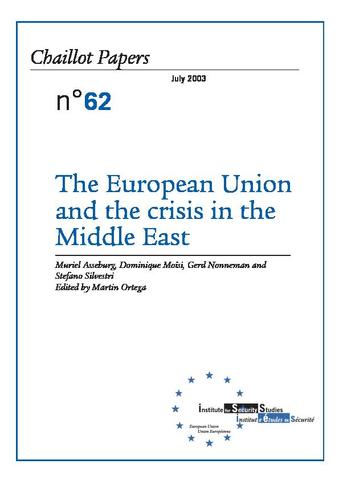 In this Chaillot Paper, five European authors put forward their views on the role played by the European Union in attempts to resolve the Israeli-Palestinian conflict since the beginning of the intifada in September 2000. Among the positive aspects of the Union’s actions, it should first be emphasised that it has defined a clear position based on the peaceful coexistence of two states within stable borders and respect for international legislation. That position, as well as a vigorous condemnation of violence, has been expressed in successive European Council statements. Second, the existence of the High Representative and a Special Envoy on the Middle East has made it possible for the Union to participate directly in various negotiating frameworks, including the Quartet, which has prepared a ‘road map’ for peace. The Union has also continued to maintain economic relations with both parties in order to avoid aggravation of the negative consequences of the conflict. Despite these positive aspects, however, the Union should play an even greater role, because both the principles and values that it upholds and its interests, like those of its member states, are endangered by the continuation of the conflict. As a result, the Union should work together with the United States, which is the principal mediator, in implementing the ‘road map’, and it should be prepared to use all instruments at its disposal to demand that the two parties renounce violence in favour of negotiation.

Transforming the Quartet principles: Hamas and the Peace Process