European strategy as a model 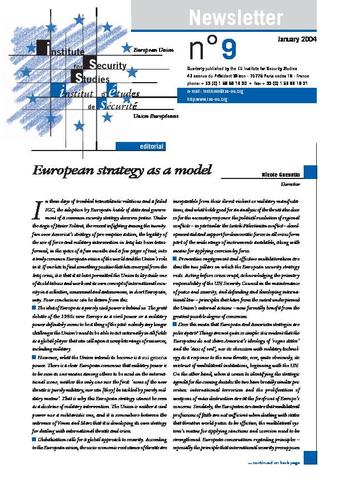 In these days of troubled transatlantic relations and a failed IGC, the adoption by European heads of state and government of a common security strategy deserves praise. Under the aegis of Javier Solana, the recent infighting among the twenty-five over America’s strategy of pre-emptive action, the legality of the use of force and military intervention in Iraq has been transformed, in the space of a few months and a few pages of text, into a truly common European vision of the world and the Union’s role in it. If one has to find something positive that has emerged from the Iraq crisis, it is that it at least permitted the Union to lay aside one of its old taboos and work out its own concept of international security in a collective, consensual and autonomous, in short European, way. Four conclusions can be drawn from this.

The idea of Europe as a purely civil power is behind us. The great debate of the 1980s over Europe as a civil power or a military power definitely seems to be a thing of the past: nobody any longer challenges the Union’s need to be able to act externally in all fields as a global player that can call upon a complete range of resources, including military. (...)

New formulas for the Middle East