European defence: the year ahead 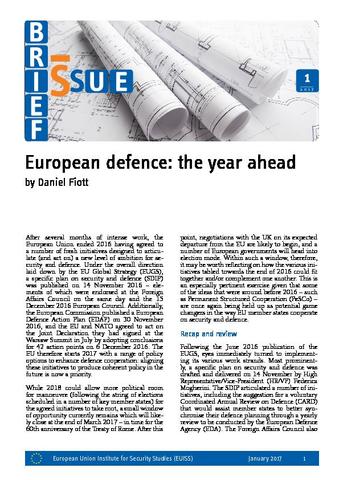 After several months of intense work, the European Union ended 2016 having agreed to a number of fresh initiatives designed to articulate (and act on) a new level of ambition for security and defence. Under the overall direction laid down by the EU Global Strategy (EUGS), a specific plan on security and defence (SDIP) was published on 14 November 2016 – elements of which were endorsed at the Foreign Affairs Council on the same day and the 15 December 2016 European Council. Additionally, the European Commission published a European Defence Action Plan (EDAP) on 30 November 2016, and the EU and NATO agreed to act on the Joint Declaration they had signed at the Warsaw Summit in July by adopting conclusions for 42 action points on 6 December 2016. The EU therefore starts 2017 with a range of policy options to enhance defence cooperation: aligning these initiatives to produce coherent policy in the future is now a priority.