A European centre of excellence in tune with the world 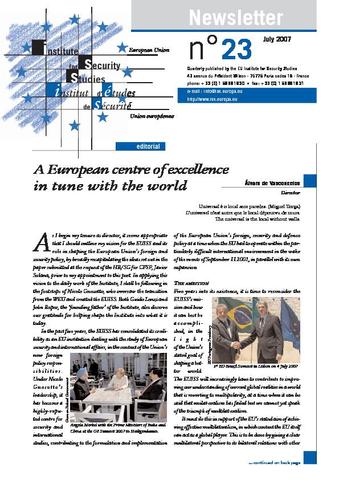 "As I begin my tenure as director, it seems appropriate that I should outline my vision for the EUISS and its role in shaping the European Union’s foreign and security policy, by broadly recapitulating the ideas set out in the paper submitted at the request of the HR/SG for CFSP, Javier Solana, prior to my appointment to this post. In applying this vision to the daily work of the Institute, I shall be following in the footsteps of Nicole Gnesotto, who oversaw the transition from the WEU and created the EUISS. Both Guido Lenzi and John Roper, the ‘founding father’ of the Institute, also deserve our gratitude for helping shape the Institute into what it is today.

Other articles in this issue:

The calm before the storm
by Martin Ortega