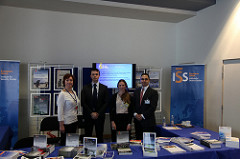 Under the theme of the European Year of Citizens, Europe Open Doors Day 2013 took place in Brussels on Saturday, 4th March.  As is the case each year, the EUISS took part and displayed a range of its publications at a stand set up in the Council Building, Justus Lipsius. Several members of staff devoted their Saturday to answering numerous questions from an interested public. The President of the European Council, Herman van Rompuy, also visited the EUISS stand.