The EU in Zimbabwe: what to do now? 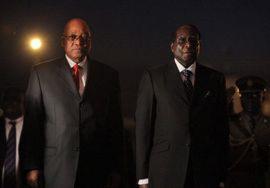 Now that South Africa, following its leadership transition, has partly changed its perspective on Zimbabwe, the main international obstacle to democratisation in Zimbabwe is the SADC’s reluctance to tackle the issue head on. As long as the SADC frustrates South Africa’s attempts to pressurise Zimbabwean actors, South African mediation will have no teeth. At the next SADC Summit in November, South Africa will try again to convince the SADC to enlarge its mediation prerogatives, which would allow it to be more interventionist in the inter-party negotiations.

A contentious issue regarding the coming election is the presence of SADC electoral observers: only the SADC can compel ZANU-PF to accept this participation. In that intra-SADC battle, the EU must fully support South Africa’s positions as herein lies one of the keys to resolving of the crisis. In order to be effective in Zimbabwe, the EU must count on South Africa, but it must help South African mediation by amending its restrictive measures and by taking sides in SADC’s internal debates.