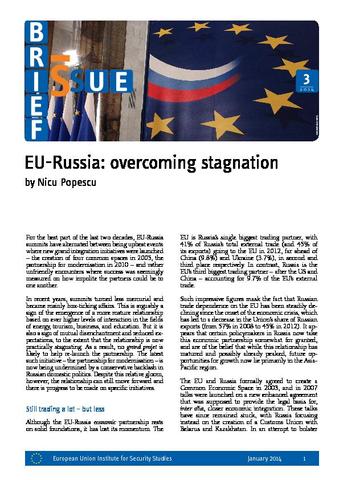 For the best part of the last two decades, EU-Russia summits have alternated between being upbeat events where new grand integration initiatives were launched – the creation of four common spaces in 2005, the partnership for modernisation in 2010 – and rather unfriendly encounters where success was seemingly measured on how impolite the partners could be to one another. In recent years, summits turned less mercurial and became mainly box-ticking affairs. This is arguably a sign of the emergence of a more mature relationship based on ever higher levels of interaction in the fields of energy, tourism, business, and education. But it is also a sign of mutual disenchantment and reduced expectations, to the extent that the relationship is now practically stagnating. As a result, no grand projet is likely to help re-launch the partnership. The latest such initiative – the partnership for modernisation – is now being undermined by a conservative backlash in Russian domestic politics. Despite this relative gloom, however, the relationship can still move forward and there is progress to be made on specific initiatives.

The Moscow riots, Russian nationalism and the Eurasian Union