The EU in a multiplex world 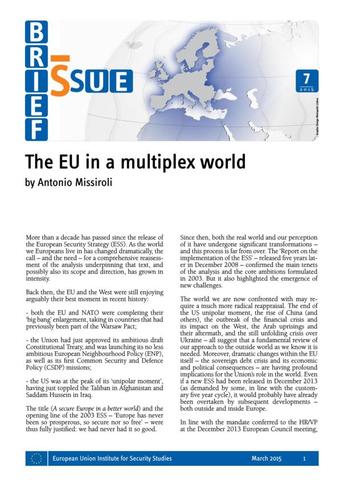 More than a decade has passed since the release of the European Security Strategy (ESS). As the world we Europeans live in has changed dramatically, the call – and the need – for a comprehensive reassessment of the analysis underpinning that text, and possibly also its scope and direction, has grown in intensity. Back then, the EU and the West were still enjoying arguably their best moment in recent history: - both the EU and NATO were completing their ‘big bang’ enlargement, taking in countries that had previously been part of the Warsaw Pact;
- the Union had just approved its ambitious draft Constitutional Treaty, and was launching its no less ambitious European Neighbourhood Policy (ENP), as well as its first Common Security and Defence Policy (CSDP) missions;
- the US was at the peak of its ‘unipolar moment’, having just toppled the Taliban in Afghanistan and Saddam Hussein in Iraq. The title (A secure Europe in a better world) and the opening line of the 2003 ESS – ‘Europe has never been so prosperous, so secure nor so free’ – were thus fully justified: we had never had it so good.

Since then, both the real world and our perception of it have undergone significant transformations – and this process is far from over. The ‘Report on the implementation of the ESS’ – released five years later in December 2008 – confirmed the main tenets of the analysis and the core ambitions formulated in 2003. But it also highlighted the emergence of new challenges. The world we are now confronted with may require a much more radical reappraisal.