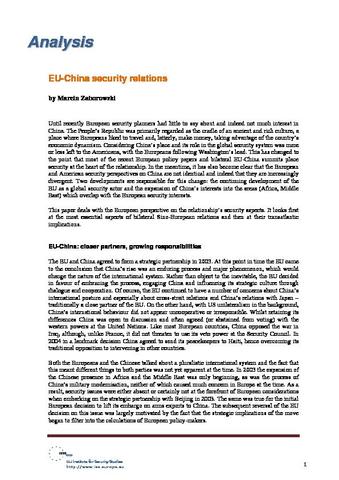 Until recently European security planners had little to say about and indeed not much interest in China. The People’s Republic was primarily regarded as the cradle of an ancient and rich culture, a place where Europeans liked to travel and, latterly, make money, taking advantage of the country’s economic dynamism. Considering China’s place and its role in the global security system was more or less left to the Americans, with the Europeans following Washington’s lead. This has changed to the point that most of the recent European policy papers and bilateral EU-China summits place security at the heart of the relationship. In the meantime, it has also become clear that the European and American security perspectives on China are not identical and indeed that they are increasingly divergent. Two developments are responsible for this change: the continuing development of the EU as a global security actor and the expansion of China’s interests into the areas (Africa, Middle East) which overlap with the European security interests.     This paper deals with the European perspective on the relationship’s security aspects. It looks first at the most essential aspects of bilateral Sino-European relations and then at their transatlantic implications. EU-China: closer partners, growing responsibilities The EU and China agreed to form a strategic partnership in 2003. At this point in time the EU came to the conclusion that China’s rise was an enduring process and major phenomenon, which would change the nature of the international system. Rather than object to the inevitable, the EU decided in favour of embracing the process, engaging China and influencing its strategic culture through dialogue and cooperation. Of course, the EU continued to have a number of concerns about China’s international posture and especially about cross-strait relations and China’s relations with Japan – traditionally a close partner of the EU. On the other hand, with US unilateralism in the background, China’s international behaviour did not appear uncooperative or irresponsible. Whilst retaining its differences China was open to discussion and often agreed (or abstained from voting) with the western powers at the United Nations. Like most European countries, China opposed the war in Iraq, although, unlike France, it did not threaten to use its veto power at the Security Council. In 2004 in a landmark decision China agreed to send its peacekeepers to Haiti, hence overcoming its traditional opposition to intervening in other countries. Both the Europeans and the Chinese talked about a pluralistic international system and the fact that this meant different things to both parties was not yet apparent at the time. In 2003 the expansion of the Chinese presence in Africa and the Middle East was only beginning, as was the process of China’s military modernisation, neither of which caused much concern in Europe at the time. As a result, security issues were either absent or certainly not at the forefront of European considerations when embarking on the strategic partnership with Beijing in 2003. The same was true for the initial European decision to lift its embargo on arms exports to China. The subsequent reversal of the EU decision on this issue was largely motivated by the fact that the strategic implications of the move began to filter into the calculations of European policy-makers. Three years after the landmark 2003 agreement, the EU decided on a major revision of its China policy. This time, it is clear that security had become one of the top factors motivating EU’s China policy, a trend which is likely to continue in the future. Security-related aspects of the EU’s three most important documents (the Commission Communication of 24 November 2006, the Finnish Presidency’s EU Council Conclusions of 11-12 December 2006 and the Joint Statement of the Ninth EU-China Summit of 9 September 2006) fall into four categories: Security governance, energy security, East Asia and China’s defence policy.