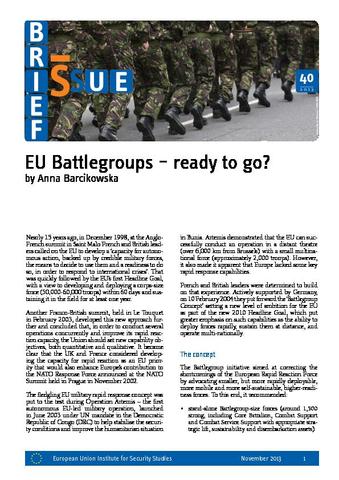 Nearly 15 years ago, in December 1998, at the Anglo-French summit in Saint Malo French and British leaders called on the EU to develop a ‘capacity for autonomous action, backed up by credible military forces, the means to decide to use them and a readiness to do so, in order to respond to international crises’. That was quickly followed by the EU’s first Headline Goal, with a view to developing and deploying a corps-size force (50,000-60,000 troops) within 60 days and sustaining it in the field for at least one year. Another Franco-British summit, held in Le Touquet in February 2003, developed this new approach further and concluded that, in order to conduct several operations concurrently and improve its rapid reaction capacity, the Union should set new capability objectives, both quantitative and qualitative. It became clear that the UK and France considered developing the capacity for rapid reaction as an EU priority that would also enhance Europe’s contribution to the NATO Response Force announced at the NATO Summit held in Prague in November 2002.

Setting the stage for the defence summit