The EU and NATO: the essential partners 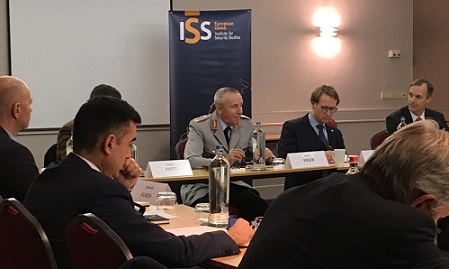 On 13 December 2018, the EU Institute for Security Studies (EUISS) and the NATO Defence College (NDC) coorganised a roundtable with the purpose of discussing recent developments in the EU-NATO partnership and ongoing obstacles to further cooperation. With EU and NATO officials in attendance, three panels discussed critical issues such as the capacity-building of partners and exercises; capability development, defence-industrial issues and military mobility; and counter-terrorism and the promotion of the Women, Peace and Security agenda.

Participants learned how it is undeniable that the level of cooperation between the EU and NATO is much higher today than it was three or four years ago. Nevertheless, it was acknowledged that there is still scope to foster complementarity between the two organisations, especially in light of the evolving transatlantic relationship and Brexit. The exchange between academic and think tank representatives with policymakers from the EU and NATO was particularly fruitful, laying the foundations for further meetings and supporting the analysis for a joint publication that will be released by the EUISS and NDC in 2019.