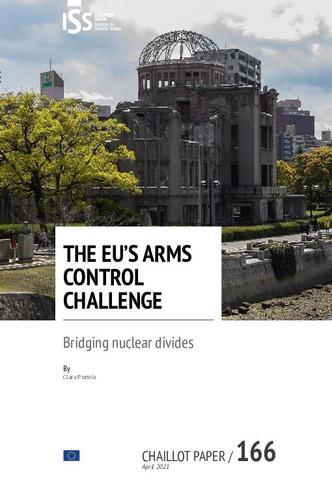 Since the adoption of its Strategy against the Proliferation of Weapons of Mass Destruction, the EU has raised its profile in the field of nuclear non-proliferation and arms control. However, the current crisis of arms control, which has recently seen the demise of key agreements like the Intermediate Nuclear  Forces Treaty (INT), represents a dual challenge for the EU: while its territory is most directly affected by the dismantlement of arms control treaties, it is not a party to them. Moreover, traditional divisions over disarmament among EU member states have been exacerbated by disagreements over the Treaty on the Prohibition of Nuclear Weapons (TPNW).

This Chaillot Paper suggests that the EU can prevent the deepening of such divisions and mitigate global polarisation in order to promote a successful outcome of the upcoming Review Conference of the Nuclear Non- Proliferation Treaty (NPT). To this end, it can make use of its access to both advocates and detractors of the TPNW in order to foster dialogue, acting as a bridge-builder between both camps while preparing for a new arms control system to replace the agreements that are progressively being abandoned.