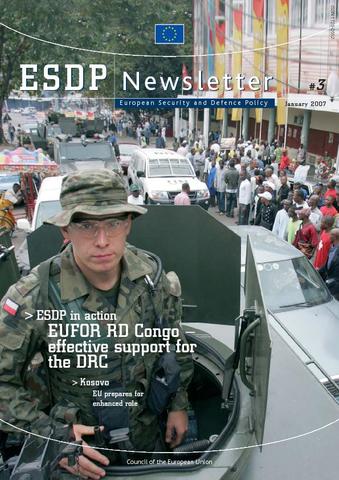 The EU military operation in the Democratic Republic of Congo has come to an end, on schedule, as the presidential election process came to its own successful conclusion. For the first time in decades, this major African country, as large as the entire EU-25, and so crucial for the stability of the Great Lakes region and of Africa as a whole, has elected its president democratically.

The EU operation, outlined in the June issue of the ESDP Newsletter, turned out to be decisive. It provided deterrence and, in the tense days of mid-August in Kinshasa, its intervention was instrumental in bringing back calm and ensuring that the election process stayed right on track. It made a difference on the ground.

The EUFOR troops are leaving the DRC, but the EU remains as determined as ever to stand by the DRC authorities in the huge task of reconstruction and consolidation that awaits them.

The EU's action during the election process in the DRC also offers us an opportunity to look at the role an important ESDP agency, the EU Satellite Centre, plays in support of operations.

While the task of supporting Congo continues for the EU after EUFOR, attention is also increasingly turning to another area in search of durable stability and consolidation of its institutions - Kosovo. Here the EU is likely to be called upon to play a growing role in the coming months and beyond. With preparations under way for a future civilian ESDP mission in Kosovo after a status settlement the ESDP Newsletter talks to the EU's representative for the Kosovo talks, Stefan Lehne, on prospects for next year.
The ESDP does not develop in a vacuum. This issue looks at some important relationships, inside the EU system with the European Parliament, and outside with the UN - just as Congo and Lebanon have provided two striking new examples of EU-UN co-operation - and tries to grasp the shape of things to come as we strive to develop a long term vision and to decipher the new ‘global puzzle’ of the world the EU will have to deal with in 2025.

The more the EU does - in the Western Balkans, in Africa, in the Middle East or in South-East Asia -, the more it is doing and will be asked to do. This is good news for an emerging global actor that wants to do its share alongside its international partners. But it is also a daunting challenge, not least in terms of capabilities. In January 2007, the EU reaches full operatonal capability with its Battlegroups and has at its disposal a new Operation Centre. These developments are part of the crucial effort to enhance the EU's capacity to undertake ESDP operations.

An endgame in Kosovo