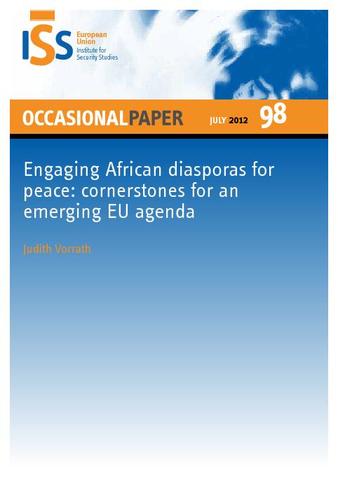 Over the last decade, researchers and policy-makers have paid increasing attention to diasporas. They have focused on diasporas not merely as a challenge, but as a source of largely untapped potential. Their transnational nature and peculiar position as non-state actors linking host and home countries has been identified as an important basis for engagement. Diaspora groups from sub-Saharan Africa in Europe comprising between 3.5 and 8 million people are not only a relevant force, but often come from homelands that have experienced or are still facing armed conflict. Thus, this Occasional Paper addresses the question of what contribution diaspora communities can make to promoting peace in their homelands and how the European Union can engage with African diasporas in the field of peace and security. The first part of the paper argues that diasporas can and should be engaged for peace, but that such engagement should take account of basic issues like the specific grievances of diasporas and not envisage their involvement as a substitution for the involvement of local actors..The specific decision on whom and how to engage can be based on an assessment of the motivation (to promote peace) and capacity (to influence homeland conflict) of diaspora components. The crucial point is that not only ‘positive’ forces that rank high on both aspects should be taken into consideration. Diaspora components with a low motivation to promote peace might still be difficult to ignore due to their (potential) impact on the relevant conflict and those with lower capacities might be important partners due to their strong will to contribute. Generally, the means to engage individuals or groups need to be adapted accordingly by changing the incentive and opportunity structure. The second part concludes that diaspora groups need to be considered as a potential force in promoting peace by the different levels and bodies of EU policy-making and be involved where criteria are met. An overview of initiatives by EU Member States, actors like the US and international organisations demonstrates that state and international actors can work with diasporas in order to promote peace in their homelands. Furthermore, experiences at the EU level show that despite some reservations among officials the EU can engage with diasporas, not only in the fields of development cooperation and internal security, but also in conflict management and resolution. Yet, there is a lack of a systematic involvement of diaspora groups in peace-promoting activities by the EU. An EU agenda in this field could emerge as part of ongoing institutional changes and the stronger presence of the EU in African countries with its delegations as well as based on existing cooperation programmes and regional strategies, for example for the Horn of Africa. Furthermore, there is a general awareness inside EU structures of the issue of diaspora engagement. These various factors can be cornerstones for an EU agenda and herald a significant improvement in engaging diasporas for peace while a more profound and systematic approach could develop in the medium- and long-term.

Diaspora groups in peace processes: lessons learned and potential for engagement by the EU