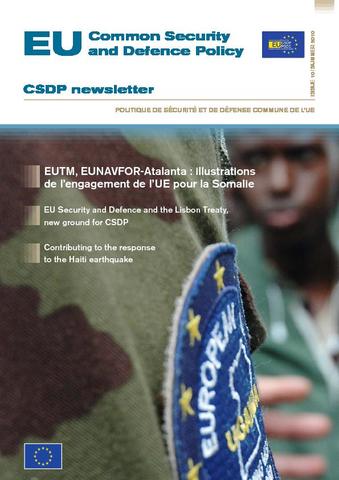 The work that will lead to the establishment of the European External Action Service (EEAS) is making steady progress in this summer 2010. On 26 July 2010, the Council of the EU adopted the decision establishing the European External Action Service based on High Representative Catherine Ashton’s initial proposal. “I am delighted that in four short months since I tabled the proposal, we have come so far. We can move forward to build a modern, effective and distinctly European service for the 21st  century. The reason is simple: Europe needs to shape up to defend better our interests and values in a world of growing complexity and fundamental power shifts.”

Other institutional steps remain, including amendments to the EU staff and fi nancial regulations and an amending budget for 2010 to allow the Service formally to come into being. But work is indeed moving apace towards the establishment of a service which will enable the EU to deliver a more effective foreign policy. The discussions on the establishment of the EEAS, after the negotiations on the Lisbon Treaty, may project the image of an EU which is inward looking, and focusing on its own institutions rather than on the world around it. But this stage is important: if the EU manages to shape its instruments – and the EEAS is a key instrument – in the right way, it will be able to deliver better results and bring more added value to international efforts on peace, security and development.

At the same time the European Union continues to develop its work in the field of crisis management. In this issue, we look at a new mission, EUTM, which is part of the EU’s efforts to continue to address the many challenges facing Somalia. The Head of EUTM, Colonel Ricardo Gonzalez Elul, tells the newsletter about the challenges he has had to face to launch the mission. A key mission is EULEX Kosovo. Two years after its launch, it is well established. We look at a crucial part of its activities, in the “EU House” in north Mitrovica. In addition to EU missions, the EU’s structures can offer signifi cant contributions to international crisis response. In the weeks that followed the devastating earthquake in Haiti, a coordinating cell – EUCO – located in the EU Situation Centre tried to facilitate the deployment of assets to alleviate the plight of the Haitian populations. The backdrop of current EU activities is made of institutional change: we look into what the Lisbon treaty holds for the Common Security and Defence Policy (CSDP), and hear from a key player in the change process, Walter Stevens, who chairs the Political and Security Committee. Working closely with HR Catherine Ashton, he manages transition in this key committee. And while there is no longer a rotating presidency as such in the fi eld of foreign affairs, Belgium does bring to the table its long experience and its strong dedication to the CSDP. The backdrop is also about economic constraints. The dire situation of public fi nances in Europe following the financial crisis of 2008 – 2009, as illustrated by the recent sovereign debt crisis, is particularly difficult. This leads André Dumoulin to look at the impact on the defence sector. For him, increased cooperation between EU member states, including in the framework of permanent structured cooperation, should be part of the answer.