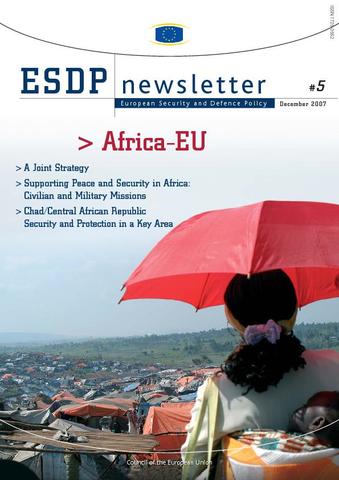 The EU-Africa summit in Lisbon on 8-9 December 2007 is due to usher in a new stage in the long-standing relations between the two continents with the adoption of a far-reaching joint strategy and a concrete action plan for its implementation. These relations, deeply rooted in history, have developed into a strong partnership, that recognises the interdependence between Africa and Europe and seeks to address regional and global challenges jointly.

The EU is already the world’s largest donor in Africa and is the continent’s most important economic and trade partner. It has a particular role to play and a particular responsibility towards the African continent.

Especially as it can avail itself of a wide array of instruments to contribute to long-term development and poverty eradication, to prevent and manage violent conflict and to build peace in developing countries.

Promoting peace and stability in Africa has been a long-standing objective of the European Union and of its foreign and security policy. The EU-Africa summit will further highlight this by making peace and security a key dimension of the new joint strategy. It provides the newsletter with a good opportunity to examine the EU's objectives, initiatives and instruments in this field.

One objective will be to support the African peace and security architecture that is taking shape under the leadership of the African Union.

EU support is provided in various forms including through crisis-management instruments. In certain cases, the EU will act in Africa in direct support to African Union, sub-regional or UN efforts to promote peace and stability through military and civilian crisis-management missions. Several of the EU's operations under the European security and defence policy have taken place in Africa, in close cooperation with African partners, notably to support the UN and often at the UN's request.
The Democratic Republic of Congo (DRC) saw the first deployment of an EU military operation outside Europe, in 2003, ARTEMIS in Bunia in the East. In 2006 operation EUFOR RD Congo made a significant contribution to the transition in the DRC by helping to maintain a stable environment during the crucial election period.

In the context of the Darfur crisis, the EU has been providing the African Union with financial and logistical support and with expertise for its mission in Sudan/Darfur (AMIS). It is now planning an EU operation in Darfur's neighbouring regions of Chad and the Central African Republic, to support a UN presence there in order to improve security.

Security sector reform (SSR) in African states is another priority. EU missions to support reform of the police and armed forces in the DRC are testimony to the EU's long-term engagement in the country and in the region. And work is at hand concerning a possible mission to support SSR in Guinea Bissau.
EU efforts also aim to help develop African capabilities, such as the AU’s African Standby Force, and to build on activities by member states to provide training and advisory, technical, planning and logistical support. African peace-making, peace-keeping and peace-building mechanisms are being strengthened at the continental, regional and national levels. A programme like EURO RECAMP is a significant example in this regard. Ensuring sustainable, predictable and flexible funding for African-led peace support operations is another challenge. A key instrument in this context is the EU's African Peace Facility.

The newsletter looks at the range of these missions and instruments. They are vivid examples of the EU's long-term engagement in favour of peace and security in Africa and of the partnership that is developing with the African Union and with African countries.