Crisis in Turkey: just another bump on the road to Europe? 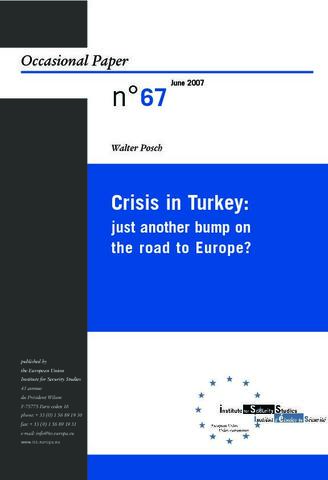 The ongoing crisis in Turkey must be seen against the background of a bifurcated society, a weak political system, a low-level insurgency in Eastern Anatolia and a military-dominated power elite steeped in a state ideology known as Kemalism. Kemalists perceive political Islam, Kurdish nationalism and European liberalism as their main challengers. Therefore, and for other reasons explained in this <i>Occasional Paper</i>, a confrontation between the Justice and Development Party (AKP), a party that has its roots in political Islam, and the military was to be expected at some point in time. Already in 2003 and 2004 the military actively considered ways of ousting the AKP from power. But the military could only muster public support once ‘Euro-fatigue’ increased in Turkey and when the fears of the secular middle class regarding a perceived AKP Islamist ‘hidden agenda’ became strong enough to drive them out into the streets to protest.
As will be shown in this paper, the ‘creeping Islamisation’ of Turkish society is indeed a cause for concern, but the AKP seems to play only a minor role in this, if indeed it plays a role at all. On the other hand, the military’s embrace of the secular aspects of Kemalism seems a little odd if one takes its role in supporting Islam after the coup d’état of 1980 into account. However, the current standoff has less to do with political Islam per se than with the powerful role of the military and its insistence that it will not accept a candidate with Islamist roots and a pro-EU reform agenda as President and Commander-in-Chief of the Turkish Republic.

Ideology and the ongoing crisis in Turkey