A common approach to the neighbourhood 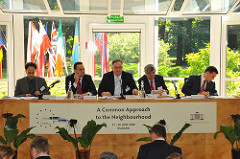 The seminar included a high-level panel on ‘Values and interests in the EU policy towards the neighbours’ and a session on the 'Achievements and shortcomings of EU policies towards the neighbours'. This was followed by discussions in four working groups addressing the following issues: Democracy and the Rule of Law; Sub-regional Integration and Unresolved Conflicts; Borders, and Energy Security. The seminar also included a high-level panel on the views from neighbouring states, both from the East and the South.

Participants were asked to consider a number of questions, including: