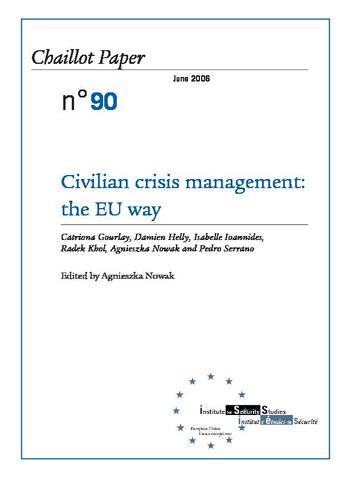 The operational progress in civilian crisis management made by the EU since 1999 has been impressive and has helped to enhance the EU's reputation as a credible security provider. However, the realisation of EU political objectives related to the strengthening of international security does not depend merely on the improvement of the EU's operational capabilities. Taking into account the EU's genuine ambition to project stability and lasting peace abroad, more attention needs to be given to its ability to use a variety of instruments in a coherent and focused manner. This capacity is particularly important in the civilian aspects of crisis management since both Community and Intergovernmental instruments can be deployed to tackle a crisis. In this context, this Chaillot Paper examines the EU's approach to civilian crisis management and its functional consistency as one of the elements of the EU's external action. It illustrates the considerable achievements in terms of civilian capabilities, decision-making procedures and missions on the ground, and also points to current shortcomings and to work in progress to address them. The coherence of the EU approach is analysed both at the institutional level (intra-pillar and inter-pillar) and at the operational level. In addition, the question of civil-military co-ordination is addressed as an important element in the consolidation of an integrated approach to EU crisis management.

The EU's Military and Civilian Crisis Management Instruments after 11 September