Change in the Middle East and North Africa: a Turkish perspective 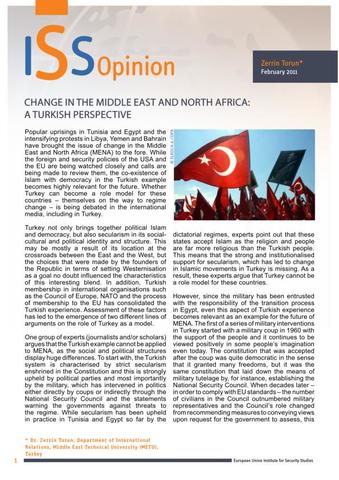 Popular uprisings in Tunisia and Egypt and the intensifying protests in Libya, Yemen and Bahrain have brought the issue of change in the Middle East and North Africa (MENA) to the fore. While the foreign and security policies of the USA and the EU are being watched closely and calls are being made to review them, the co-existence of Islam with democracy in the Turkish example becomes highly relevant for the future. Whether Turkey can become a role model for these countries – themselves on the way to regime change – is being debated in the international media, including in Turkey.

Turkey not only brings together political Islam and democracy, but also secularism in its social-cultural and political identity and structure. This may be mostly a result of its location at the crossroads between the East and the West, but the choices that were made by the founders of the Republic in terms of setting Westernisation as a goal no doubt influenced the characteristics of this interesting blend. In addition, Turkish membership in international organisations such as the Council of Europe, NATO and the process of membership to the EU has consolidated the Turkish experience. Assessment of these factors has led to the emergence of two different lines of arguments on the role of Turkey as a model.