The bear and the beaver: Russia and European energy security 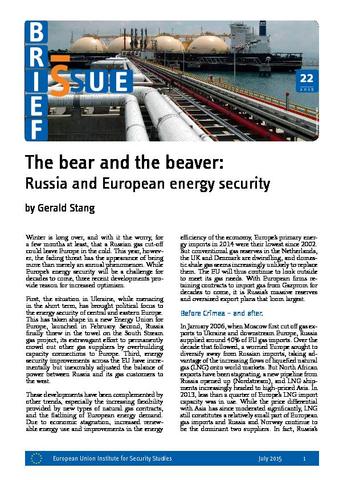 Winter is long over, and with it the worry, for a few months at least, that a Russian gas cut-off could leave Europe in the cold. This year, however, the fading threat has the appearance of being more than merely an annual phenomenon. While Europe’s energy security will be a challenge for decades to come, three recent developments provide reason for increased optimism. First, the situation in Ukraine, while menacing in the short term, has brought political focus to the energy security of central and eastern Europe. This has taken shape in a new Energy Union for Europe, launched in February. Second, Russia finally threw in the towel on the South Stream gas project, its extravagant effort to permanently crowd out other gas suppliers by overbuilding capacity connections to Europe. Third, energy security improvements across the EU have incrementally but inexorably adjusted the balance of power between Russia and its gas customers to the west.

Climate change and EU security – When and how they intersect