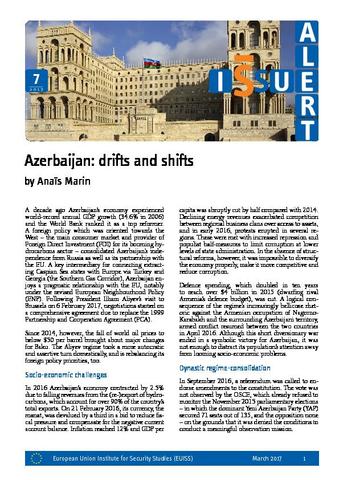 A decade ago Azerbaijan’s economy experienced world-record annual GDP growth (34.6% in 2006) and the World Bank ranked it as a top reformer. A foreign policy which was oriented towards the West – the main consumer market and provider of Foreign Direct Investment (FDI) for its booming hydrocarbons sector – consolidated Azerbaijan’s independence from Russia as well as its partnership with the EU. A key intermediary for connecting extracting Caspian Sea states with Europe via Turkey and Georgia (the Southern Gas Corridor), Azerbaijan enjoys a pragmatic relationship with the EU, notably under the revised European Neighbourhood Policy (ENP). Following President Ilham Aliyev’s visit to Brussels on 6 February 2017, negotiations started on a comprehensive agreement due to replace the 1999 Partnership and Cooperation Agreement (PCA).

Since 2014, however, the fall of world oil prices to below $50 per barrel brought about major changes for Baku. The Aliyev regime took a more autocratic and assertive turn domestically, and is rebalancing