After the EUGS: mainstreaming a new CSDP 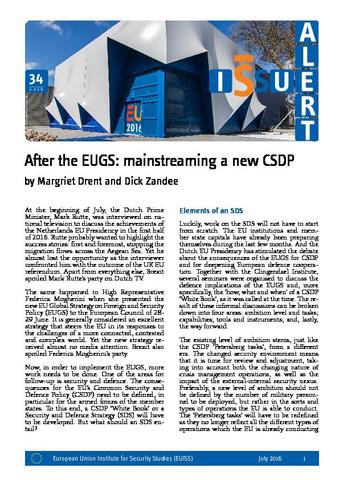 At the beginning of July, the Dutch Prime Minister, Mark Rutte, was interviewed on national television to discuss the achievements of the Netherlands EU Presidency in the first half of 2016. Rutte probably wanted to highlight the success stories: first and foremost, stopping the migration flows across the Aegean Sea. Yet he almost lost the opportunity as the interviewer confronted him with the outcome of the UK EU referendum. Apart from everything else, Brexit spoiled Mark Rutte’s party on Dutch TV. The same happened to High Representative Federica Mogherini when she presented the new EU Global Strategy on Foreign and Security Policy (EUGS) to the European Council of 28-29 June. It is generally considered an excellent strategy that steers the EU in its responses to the challenges of a more connected, contested and complex world. Yet the new strategy received almost no media attention. Brexit also spoiled Federica Mogherini’s party.

After the EUGS: connecting the dots