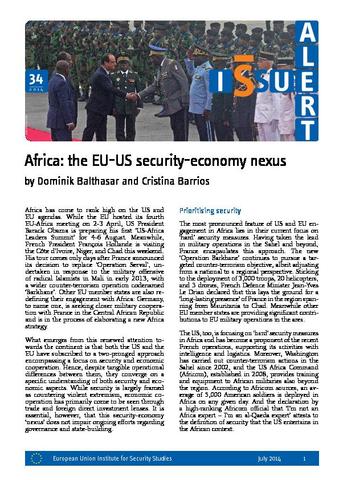 Africa has come to rank high on the US and EU agendas. While the EU hosted its fourth ­EU-Africa meeting on 2-3 April, US President Barack Obama is preparing his first ‘US-Africa Leaders Summit’ for 4-6 August. Meanwhile, French President François Hollande is visiting the Côte d’Ivoire, Niger, and Chad this weekend. His tour comes only days after France announced its decision to replace ‘Operation Serval’, undertaken in response to the military offensive of radical Islamists in Mali in early 2013, with a wider counter-terrorism operation codenamed ‘Barkhane’. Other EU member states are also redefining their engagement with Africa: Germany, to name one, is seeking closer military cooperation with France in the Central African Republic and is in the process of elaborating a new Africa strategy.
What emerges from this renewed attention towards the continent is that both the US and the EU have subscribed to a two-pronged approach encompassing a focus on security and economic cooperation. Hence, despite tangible operational differences between them, they converge on a specific understanding of both security and economic aspects. While security is largely framed as countering violent extremism, economic cooperation has primarily come to be seen through trade and foreign direct investment lenses. It is essential, however, that this security-economy ‘nexus’ does not impair ongoing efforts regarding governance and state-building.