Women in peacebuilding: the EU & others 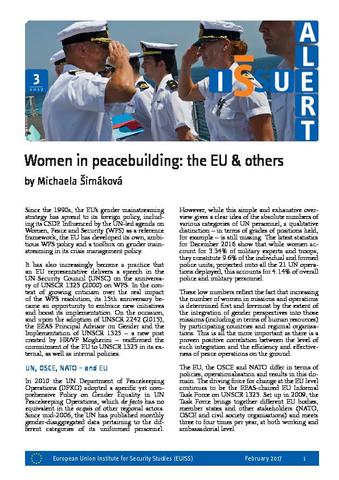 Since the 1990s, the EU’s gender mainstreaming strategy has spread to its foreign policy, including its CSDP. Influenced by the UN-led agenda on Women, Peace and Security (WPS) as a reference framework, the EU has developed its own, ambitious WPS policy and a toolbox on gender mainstreaming in its crisis management policy. It has also increasingly become a practice that an EU representative delivers a speech in the UN Security Council (UNSC) on the anniversary of UNSCR 1325 (2000) on WPS. In the context of growing criticism over the real impact of the WPS resolution, its 15th anniversary became an opportunity to embrace new initiatives and boost its implementation.