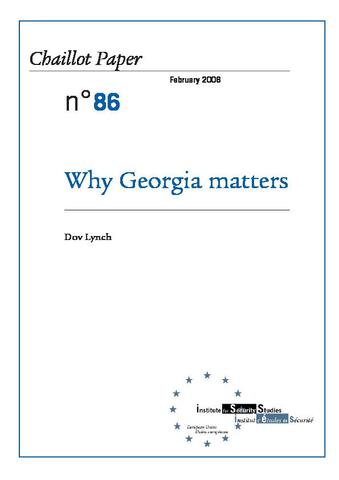 Does Georgia matter for the EU? The 'Rose Revolution' of November 2003 may have brought democracy to this former Soviet republic, but it is a fragile democracy, and the country is still bedevilled by institutional weakness and internal conflicts. This Chaillot Paper explores the EU's relationship with Georgia and evaluates the stakes that the EU has in the country. The future enlargement of the EU to Romania and Bulgaria will bring the Union into direct proximity with Georgia, which lies on the eastern shores of the Black Sea. Georgia also embodies the security challenges currently facing the Union. A range of factors pleads in favour of increased EU involvement in the country, from energy security to the threats posed by organised crime and even terrorism. The challenge facing the EU is to raise its profile to the level of its interests. In so doing, this Chaillot Paper argues that the EU should focus on two limited foreign policy objectives. First, the Union should seek to strengthen the Georgian state. Second, the EU should seek to break the inertia that has entrenched the status quo in Georgia's conflicts. To achieve these objectives, this Chaillot Paper puts forward three ideas: supporting comprehensive judicial reform, strengthening Georgia's border security with the reform of the Border Guard service, and opening up the separatist regions to greater international engagement.

The EU and conflict resolution in Georgia