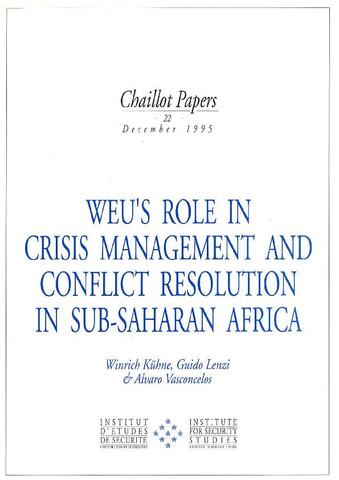 This Chaillot Paper represents a foray into a field that is not obviously in the mainstream of WEU's mandate, especially for those who still think that WEU should not stray too far from traditional European tasks. Yet Europe cannot decline the wider, global mission of preventing crises and building stability wherever necessary. The ideas expressed in this publication result from a joint initiative begun earlier this year by the Institute and the Instituto de Estudos Estratégicos e Internacionais, Lisbon. A first seminar, held in the spring in Lisbon, established the basic elements of peacekeeping in sub-Saharan Africa; a second, in Paris in October, tried to assess the European responses to those challenges. What we consider to be some provisional conclusions are presented here. (It should be mentioned that the EU, NATO and, within the UN, UNIDIR, are also actively engaged in the same process.) The most challenging consideration is that common activities in Africa can represent another very valuable litmus test for the cohesion and political responsibility of the many countries involved in WEU, in conjunction with others, in undertaking peacekeeping missions in a geographic area where their solidarity cannot be misinterpreted.