From West Point to Brussels – via Warsaw 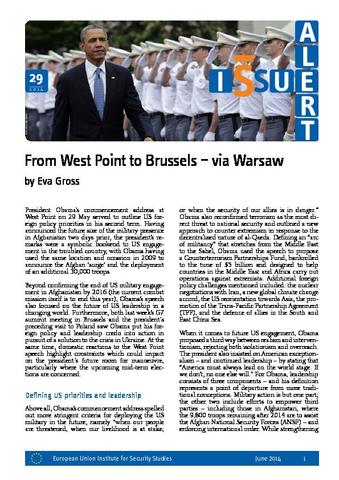 President Obama’s commencement address at West Point on 29 May served to outline US foreign policy priorities in his second term. Having announced the future size of the military presence in Afghanistan two days prior, the president’s remarks were a symbolic bookend to US engagement in the troubled country, with Obama having used the same location and occasion in 2009 to announce the Afghan ‘surge’ and the deployment of an additional 30,000 troops.
Beyond confirming the end of US military engagement in Afghanistan by 2016 (the current combat mission itself is to end this year), Obama’s speech also focused on the future of US leadership in a changing world. Furthermore, both last week’s G7 summit meeting in Brussels and the president´s preceding visit to Poland saw Obama put his foreign policy and leadership credo into action in pursuit of a solution to the crisis in Ukraine. At the same time, domestic reactions to the West Point speech highlight constraints which could impact on the president´s future room for manoeuvre, particularly where the upcoming mid-term elections are concerned.