Virtual or real change? The parliamentary elections in Belarus 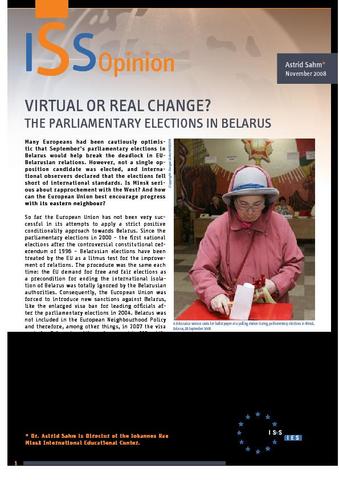 So far the European Union has not been very successful in its attempts to apply a strict positive conditionality approach towards Belarus. Since the parliamentary elections in 2000 − the first national elections after the controversial constitutional referendum of 1996 − Belarusian elections have been treated by the EU as a litmus test for the improvement of relations.

The procedure was the same each time: the EU demand for free and fair elections as a precondition for ending the international isolation of Belarus was totally ignored by the Belarusian authorities. Consequently, the European Union was forced to introduce new sanctions against Belarus and Belarus was not included in the European Neighbourhood Policy.

Many Europeans had been cautiously optimistic that September’s parliamentary elections in Belarus would help break the deadlock in EU-Belarusian relations. However, not a single opposition candidate was elected, and international observers declared that the elections fell short of international standards.

In this article, Astrid Sahm of the Johannes Rau International Education Center in Minsk looks at developments before and after the September elections, and recommends ways forward for the EU.

Time for new thinking on Belarus