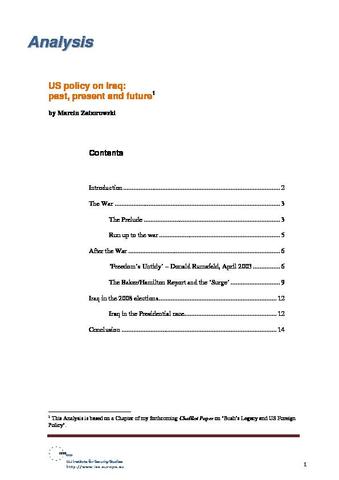 George W. Bush will be remembered first and foremost for starting the war in Iraq and the destabilisation of the country that ensued. This means that, unless there is a dramatic improvement in Iraq before 2009, which appears highly unlikely at the present time, Bush will not be remembered as a successful President. Bush took his country into this war although he did not have to – as argued by Zbigniew Brzezinski, this was a ‘war of choice’. The decision to go to war was not authorised by the United Nations and it was thus considered illegal and opposed by the majority of world opinion. The war significantly eroded America’s ‘soft power’. It also did untold damage to its international image. From being universally admired and emulated around the globe, the US is now considered by world opinion to be one of the most dangerous nations on earth.
Despite some success in the ‘surge’ policy, which Bush adopted in the wake of the Congressional elections won by the Democrats in November 2006, the human and material cost of the war continues to climb and the instability in the region continues unabated. America’s regional adversary, Iran, has been strengthened and its allies, moderate Sunni states, weakened. Most importantly, the war in Iraq did not diminish the terrorist danger. On the contrary, since the invasion of Iraq the activity of al-Qaeda cells has been on the rise with some terrorist attacks, such as those in Madrid in March 2004 and in London in July 2005 being explicitly motivated by the war.
George W. Bush created this situation but it will be his successors who will have to find the way forward, or rather the way out of Iraq. This will be an extremely difficult task, given that Americans are still haunted by the images of the frenzied evacuation of the US embassy in Saigon on 30 April 1975. No future American President can afford to be remembered as the one who ‘abandoned’ Iraq, equally no President can continue to spend vast resources and risk lives with little chance of success. Following the Congressional elections in November 2006, the goalposts of the debate have moved. Since their victory in the Congressional elections the emboldened Democrats have tabled several resolutions demanding a timetable for the troops’ withdrawal without being seen by the public as ‘unpatriotic’.
No heavyweight candidates for the 2008 elections speak uncritically about Bush’s Iraq record. The Republican frontrunner, John McCain, supported the decision to go to war against Saddam but he has been consistently critical of the President’s conduct of the war and especially of the decision to invade Iraq with a comparatively small force. McCain has also been one of the staunchest critics of Guantanamo and the practice of treating prisoners outside the remits of the Geneva Convention. On the Democratic side, both frontrunners Hillary Clinton and Barrack Obama want to pull out of Iraq, although not unconditionally and with certain caveats. If a Democrat wins in November 2008 there is likely to be a change of course in Iraq. But realities on the ground may make it very difficult if not impossible for future President to take a radical and quick decision on the future of the US military presence there.