US defence after the mid-term elections 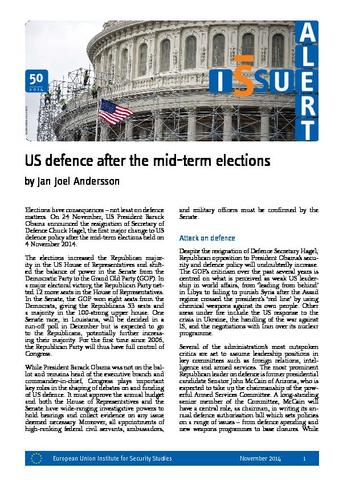 Elections have consequences – not least on defence matters. On 24 November, US President Barack Obama announced the resignation of Secretary of Defence Chuck Hagel, the first major change to US defence policy after the mid-term elections held on 4 November 2014. The elections increased the Republican majority in the US House of Representatives and shifted the balance of power in the Senate from the Democratic Party to the Grand Old Party (GOP). In a major electoral victory, the Republican Party netted 12 more seats in the House of Representatives. In the Senate, the GOP won eight seats from the Democrats, giving the Republicans 53 seats and a majority in the 100-strong upper house. One Senate race, in Louisiana, will be decided in a run-off poll in December but is expected to go to the Republicans, potentially further increasing their majority. For the first time since 2006, the Republican Party will thus have full control of Congress. eemed necessary.

Staying ahead: the US and future technologies

From West Point to Brussels – via Warsaw