Unfinished business in the Balkans 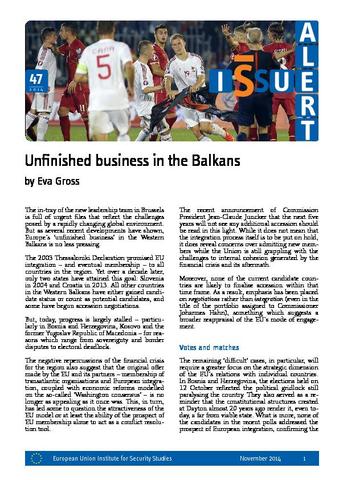 The in-tray of the new leadership team in Brussels is full of urgent files that reflect the challenges posed by a rapidly changing global environment. But as several recent developments have shown, Europe´s ‘unfinished business’ in the Western Balkans is no less pressing. The 2003 Thessaloniki Declaration promised EU integration – and eventual membership – to all countries in the region. Yet over a decade later, only two states have attained this goal: Slovenia in 2004 and Croatia in 2013. All countries in the Western Balkans have either gained candidate status or count as potential candidates, and some have begun accession negotiations.

But, today, progress is largely stalled – particularly in Bosnia and Herzegovina, Kosovo and the former Yugoslav Republic of Macedonia – for reasons which range from sovereignty and border disputes to electoral deadlock.