Transatlantic relations under an Obama administration 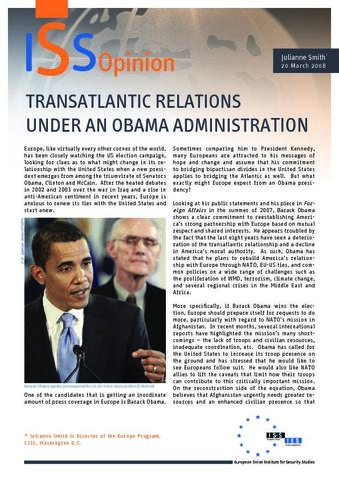 Europe, like virtually every corner of the world, has been closely watching the US election campaign, looking for clues as to what might change in its relationship with the United States when a new president emerges from among the triumvirate of Senators Hillary Clinton, Barack Obama and John McCain. After the heated debates in 2002 and 2003 over the war in Iraq and a rise in anti-American sentiment in recent years, Europe is anxious to renew its ties with the United States and start anew.  One of the candidates that is getting an inordinate amount of press coverage in Europe is Barack Obama.  Sometimes comparing him to President Kennedy, many Europeans are attracted to his messages of hope and change and assume that his commitment to bridging bipartisan divides in the United States applies to bridging the Atlantic as well.  But what exactly might Europe expect from an Obama presidency?

Looking at his public statements and his piece in Foreign Affairs in the summer of 2007, Barack Obama shows a clear commitment to reestablishing America’s strong partnership with Europe based on common respect and shared interests.  He appears troubled by the fact that the last eight years have seen a deterioration of the transatlantic relationship and a decline in America’s moral authority.  As such, Obama has stated that he plans to rebuild America’s relationship with Europe through NATO, EU-US ties, and common policies on a wide range of challenges such as the proliferation of WMD, terrorism, climate change, and several regional crises in the Middle East and Africa.