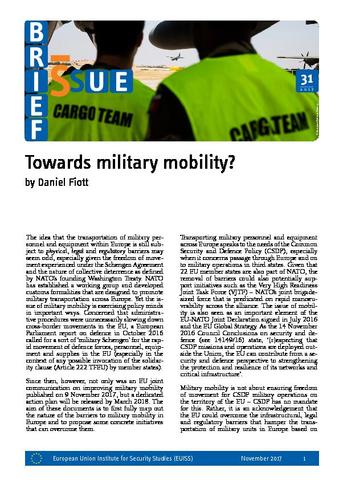 The idea that the transportation of military personnel and equipment within Europe is still subject to physical, legal and regulatory barriers may seem odd, especially given the freedom of movement experienced under the Schengen Agreement and the nature of collective deterrence as defined by NATO’s founding Washington Treaty. NATO has established a working group and developed customs formalities that are designed to promote military transportation across Europe. Yet the issue of military mobility is exercising policy minds in important ways. Concerned that administrative procedures were unnecessarily slowing down cross-border movements in the EU, a European Parliament report on defence in October 2016 called for a sort of ‘military Schengen’ for the rapid movement of defence forces, personnel, equipment and supplies in the EU (especially in the context of any possible invocation of the solidarity clause (Article 222 TFEU) by member states).

Since then, however, not only was an EU joint communication on improving military mobility published on 9 November 2017, but a dedicated action plan will be released by March 2018. The aim of these documents is to first fully map out the nature of the barriers to military mobility in Europe and to propose some concrete initiatives that can overcome them.

European Security and Defence – The basics