Terrorism and enlargement: a clash of dynamics 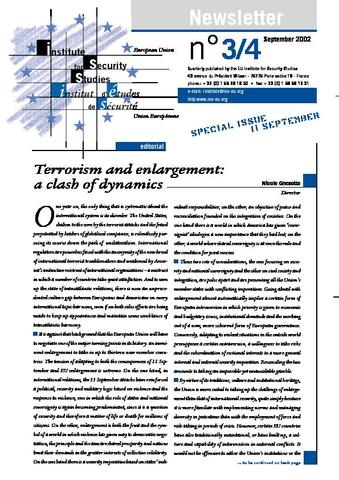 One year on, the only thing that is systematic about the international system is its disorder. The United States, shaken to the core by the terrorist attacks and the fraud perpetrated by leaders of globalised companies, is relentlessly pursuing its course down the path of unilateralism. International regulators are powerless faced with the anonymity of the new breed of international terrorist troublemakers and weakened by America’s instinctive mistrust of international organisations – a mistrust in which a number of countries take quiet satisfaction. And to sum up the state of transatlantic relations, there is now an unprecedented culture gap between Europeans and Americans on every international topic bar none, even if on both sides efforts are being made to keep up appearances and maintain some semblance of transatlantic harmony. It is against that background that the European Union will have to negotiate one of the major turning points in its history: an imminent enlargement to take in up to thirteen new member countries. The tension of adapting to both the consequences of 11 September and EU enlargement is extreme. On the one hand, in international relations, the 11 September attacks (...)

Other articles in this issue: US: the new Leviathan?
by Julian Lindley-French Russia: anchoring in troubled seas
by Dov Lynch Middle East: the crux of the matter
by Martin Ortega US: going nuclear?
by Burkard Schmitt

US: the new Leviathan?

Beyond terrorism and privacy: a transatlantic agenda for global security?