Syria: violence as a communications strategy

The revolt against the Assad regime in Syria, after 47 years of Baathist rule, is relatively simple to understand; the more pertinent question is probably to wonder why it did not happen sooner.  It is the politics of Washington and Brussels that are complicated. The international community has so far failed to come up with a clear and unambiguous statement about Syria. It is giving the Assad regime the wrong message: that they cannot see beyond it, that they are afraid of what will come after and that they want it to stay. Even asking him to reform and offering help conveys this. Thus President Assad believes that he has carte blanche to do what it takes to restore his grip over Syria.

The Illusion of Power

Power is ultimately intangible; it is a matter of building up an idea of power and of belief in that power. Assad’s power rests on pillars that took two generations to consolidate. They are based on creating the idea that the regime is indispensable, irreplaceable and that beyond it is unimaginable.

The tricks of the trade are for the regime to create problems that only it can resolve. This makes it indispensable for regional peace and stability. For example, sending insurgents into Iraq and then offering to stabilize the border.  At the same time no viable opposition is allowed to emerge as an alternative including the army; and whatever opposition is visible is also undesirable.

There is also a need to convince the world that if the Syrian regime goes, what follows would be a combination of sectarian civil war and fundamentalist radical Islam, war with Israel, attacks against UNIFIL, instability in Lebanon and Iraq, ethnic cleansing of religious minorities and so on. The combination of all this creates a smokescreen that prevents the international community from contemplating the world beyond the regime. It thus appears to cling to its continuity.

The regime’s survival depends more on the viability of this idea, both locally and internationally, than on its ability to repress its population.  There are instruments of repression that can re-enforce it and consolidate power, but using them is a form of weakness – they are only needed when the idea is challenged and when faith in the illusion of power is faltering.

Thus, clear statements from the west indicating that faith in these pillars no longer exists are more effective than sanctions or military intervention. These alone can dismantle the idea of the Syrian regime’s power. The latter may even strengthen the regime’s legitimacy. The regime’s actions are also directed at consolidating the illusion of its power.

It is complications on the European and American side that are preventing a clear statement from being formulated. The Arab spring was badly timed, it came when debate over the region had settled down to a policy of promoting stability and of engagement with the dictators of the region. Ideas like regime change, democratization and intervention were associated with Bush era traumas and were abandoned and replaced with a new realism that prevailed in international affairs.  Engagement with the Assad regime in Syria was at the center of the debate.

This new mood is best illustrated in Europe by contrasting the dictum at the launch of the European Neighborhood Policy (ENP) in 2003: that European security depends on being surrounded by a ring of well governed states; with the image of Europe's leaders surrounded by Mubarak, Ben Ali, Assad and the rest of a ring of the rulers of very badly governed states in Paris on a podium in the summer of 2008 at the launch of the Union for the Mediterranean (UfM).

Western policy makers thus suffer from several traumas and syndromes that are preventing a clear statement from being formulated on Syria. Residual of post-colonial guilt combined with the fear of creating another Iraq, intervening in another Libya, engaging in another cold war with Russia all contribute to blurring the mind. Most of all politicians are wary of admitting they were wrong, that engagement was a bad idea and of formulating statements that will make them echo the language of the Bush era.

“The battle for hearts and minds” in reverse

Imagine western policy makers lying on a psychoanalyst’s couch and being bombarded by messages from both sides – the regime and the demonstrators – both playing on their traumas.

The Syrian regime uses violence as a means of sending messages that exacerbate western fears and reinforce the illusion of its power and confuse the west further. Sending tanks rolling into Deraa or attacking the city of Hama are intended to evoke images of another Benghazi situation, of sectarian civil war, of regional divisions a la Iraq, all things that the west dreads. While at the same time sending contradictory statements about reform gives hope that the policy of engagement was not such a mistake after all. Violence as a communications strategy is supplemented by rumours of Salafis and Jihadis combined with the Muslim Brotherhood leading the revolt.

The demonstrators in Syria are conveying the opposite messages; their slogans are meant to alleviate western fears and appeal for western support.  The chant of silmiyyeh, silmiyyeh meaning peaceful and non-violent is repeated even when confronted with tanks and bullets. Other chants that say that the Syrian people are united, that Sunnis, Alawis, Kurds and Christians are together and that they want freedom. No American, European or Israeli flags are burned; instead when Hizballah and Iran appealed for support to the Assad regime it was their flags that were set ablaze.

This time it is the people of the region that are battling for the ‘Hearts and Minds’ of western policy makers, trying to convince the west of what they believe are the West’s own values, and not the other way round. The mantra of the regime was that Syria is not Tunis and not Egypt; the mantra of the West should be Syria is not Iraq and not Libya.

Europe and the West do not have the luxury of doing nothing. Having no policy is a policy in itself and there are huge interests at stake. The West needs to calibrate its communication and statements to be consistent with its long term objectives.

It is impossible to imagine the Assad regime restoring its authority to the status quo ante. Once that illusion is dead and the barrier of fear has been crossed. It would take another 40 years to rebuild it. In fact the tricks have stopped working on the population that has been subjected to it for so long.

If indeed the point of no return has been crossed then it is a matter of time and cost before change happens in Syria – it will no doubt be change to the better. But lack of clarity from the West is contributing to making the process longer and much more costly. The West cannot be neutral, hesitation translates into a license to kill.

Nadim Shehadi is an Associate Fellow at Chatham House 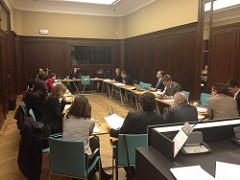