The shale gas ‘revolution’: challenges and implications for the EU 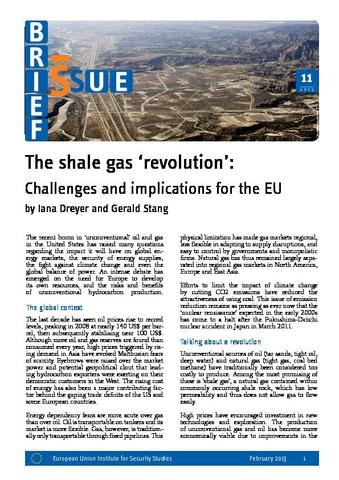 Unconventional sources of oil (tar sands, tight oil, deep water) and natural gas (tight gas, coal bed methane) have traditionally been considered too costly to produce. Among the most promising of these is ‘shale gas’, a natural gas contained within commonly occurring shale rock, which has low permeability and thus does not allow gas to flow easily. High prices have encouraged investment in new technologies and exploration. The production of unconventional gas and oil has become more economically viable due to improvements in the drilling of horizontal wells and hydraulic fracturing, or ‘fracking’, a process which involves the injection of sand, chemicals and water into shale rock to re­lease trapped hydrocarbons. The recent boom in ‘unconventional’ oil and gas in the United States has raised many questionsregarding the impact it will have on global energy markets, the security of energy supplies, the fight against climate change and even the global balance of power. An intense debate has emerged on the need for Europe to develop its own resources, and the risks and benefits of unconventional hydrocarbon production.