Serbian elections: who has actually won and what does this mean for the EU? 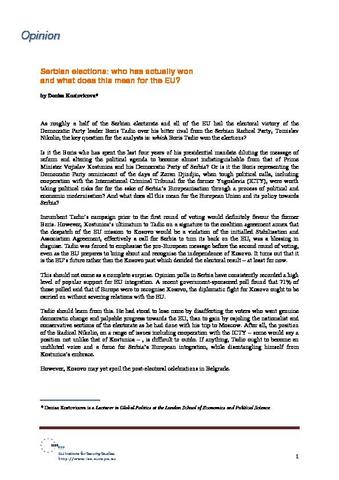 As roughly a half of the Serbian electorate and all of the EU hail the electoral victory of the Democratic Party leader Boris Tadic over his bitter rival from the Serbian Radical Party, Tomislav Nikolic, the key question for the analysts is: which Boris Tadic won the elections?

Is it the Boris who has spent the last four years of his presidential mandate diluting the message of reform and altering the political agenda to become almost indistinguishable from that of Prime Minister Vojislav Kostunica and his Democratic Party of Serbia? Or is it the Boris representing the Democratic Party reminiscent of the days of Zoran Djindjic, when tough political calls, including cooperation with the International Criminal Tribunal for the former Yugoslavia (ICTY), were worth taking political risks for for the sake of Serbia’s Europeanisation through a process of political and economic modernisation? And what does all this mean for the European Union and its policy towards Serbia?