Second meeting of the Task Force on Russia’s futures 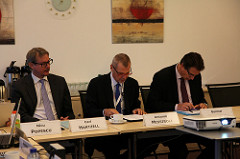 The second meeting of the EUISS Task Force on Russia’s Futures took place on the 22nd of October 2015 in Brussels. The meeting gathered think tankers and experts from Russia and Europe, as well as EU and NATO officials. The group examined the foundations of Russia’s power, its military and security policy, and the future of its economy and energy policies. The discussions identified changes, challenges and potential developments in internal factors (i.e. state policy) and external ones (i.e. sanctions) which will have an impact on Russia’s economy. They also explored the potential sources of economic growth, public opinion on the recent economic downturn, and EU-Russia energy cooperation. Other topics debated included Russia’s military modernisation and security strategy, nuclear deterrence, and methods of warfare in the context of Russia-NATO relations.