Russia — Insights from a changing country

02 March 2012
By
With contributions from 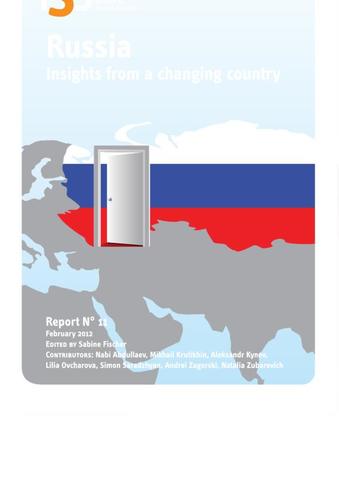 The mass protests in Moscow and other Russian cities after the parliamentary elections on 4 December 2011 shattered long-standing assumptions about the Russian political system and the apathy of Russian society. They raise new questions about the evolution of Russian society and state-society relations. These are extremely serious issues not only for the protesters and external observers, but also for a Russian leadership whose legitimacy is at risk and who, in one way or another, will have to react to this vocal expression of discontent and demand for change.

This EUISS Report features contributions from a group of Russian authors with outstanding expertise on important Russian domestic and foreign policy issues. They all contributed analytical papers to the Institute’s ‘Russia Insights’ series, which were published online during the weeks before the parliamentary and presidential elections. Therefore, some of the papers where written before and some after the public protests started. Together, they provide valuable insights into Russian politics and society and into the country’s economic system as well as into Russia’s foreign policy posture. The result is a very complex picture combining elements of dynamism, stasis and stagnation.

Over the past ten years the Russian political system has been systematically manipulated and tailored to the needs of a small ruling elite whose main strategic goal is the preservation of their political power and access to economic resources. The proverbial ‘power vertical’, completed during Vladimir Putin’s second presidential term, works at the national as well as the regional level.

As Aleksander Kynev demonstrates in his analyses, ‘the party and electoral system today reflects the ruling elite’s efforts to centralise and control’. Electoral and party legislation have become increasingly supportive of United Russia, the so-called ‘party of power’, and increasingly restrictive and discriminating vis-à-vis other parties. This development has severe consequences for the political system and state-society relations: on the one hand political parties have been unable to evolve into stable political entities with a clear profile and substance. As a result the State Duma has degenerated into a rubber stamp forum for the political leadership. The Kremlin on the other hand, has lost all connection with the population (and vice versa). The Russian people are unable to use elections as a means to communicate their wishes to the state, while the state is not attuned to changing societal moods, which explains why it was taken by surprise by the protests after the Duma elections.

Natalia Zubarevich confirms this assessment of the dysfunctionality of the power vertical for the relationship between the centre and the regions. She diagnoses the approaching end of the ‘informal social contract’ between the political leadership and Russian society, whereby Moscow guaranteed low-level economic stability through financial transfers and subsidies to the majority of economically underdeveloped regions. In the light of the economic crisis and growing unemployment, the centre will find it increasingly difficult to face the challenges inherent in Russia’s unreformed federal structures, which are geared to control and co-opt regional elites but do not contribute to the improvement of the quality of governance, regional development and modernisation.

It is in the field of energy that Russian political and economic interests are concentrated. Mikhail Krutikhin delivers a pointed analysis of how state-dominated companies, dysfunctional governance, poor management practices and the rent-seeking behaviour of the elite undermine attempts to reform the outdated Russian energy sector. Modernisation, which in the long run is the only viable strategy to keep this sector competitive at the global level, clashes with the short-term interests of the actors currently in control of the energy sector. This group of veto players, labelled a ‘collective Putin’ by Krutikhin, constantly interferes with political processes in order not to be forced to cede political and economic control.

The authors of this report agree that President Medvedev’s attempts to promote the idea of modernisation in the Russian discourse have done little, if anything, to change the flaws of the political and economic system and to better connect state and society. On the contrary, more often than not they consider Medvedev as ‘part of the problem rather than the solution’ (Krutikhin).

On the other hand, the modernisation debate has encouraged the expression of discontent, first among the broader political and intellectual elite, and, after the Duma elections in December, among Russian society at large. Russians have never developed much trust in their political system. Until recently, however, this distrust was focused on political institutions, while leading political figures, and above all Prime Minister Putin, enjoyed high public support. This has been changing in the past year. The crisis of legitimacy of the political system has turned into a legitimacy crisis that directly affects its leader.

This leads to the question of who is actually demonstrating. Simon Saradzhyan and Nabi Abdullaev claim that today more than 80 percent of the Russian urban population consider themselves to belong to the middle class, which they identify as the main source of public protest. Interestingly, Lilia Ovcharova’s economic analysis of the development and situation of the middle class is much less optimistic. According to her this social stratum has not grown to encompass more than 20 percent of Russian society despite the economic boom of the 2000s, and has been most severely affected by the economic crisis. This contradiction points to a double discrepancy: the majority of people describing themselves as middle class are apparently denied access to economic resources, while at the same time the middle class as a whole is denied appropriate political representation.

Foreign policy issues do not usually play a prominent role in Russian elections. However, back in October Vladimir Putin announced the ‘Eurasian Union’ as a new integration initiative for Russia’s neighbourhood. This idea, which should be seen in the context of Russia’s aspiration to regional great power and global player status, is clearly part of Putin’s election programme. Andrei Zagorski analyses the development of Moscow’s more active integration initiatives in recent years and predicts that, although their success is questionable, they will feature prominently in Putin’s conservative foreign policy agenda, if necessary in competition with the EU. Saradzhyan and Abdullaev suspect that while an intentional reverse of the reset in US-Russian relations is unlikely, the atmosphere may become more tense, particularly if President Obama is voted out of office at the end of the year.

None of the authors voice any doubts as to Vladimir Putin’s eventual return to the Kremlin. The big question for the coming months and years is, therefore, whether the new/old political leadership will be able to respond to the changing societal realities and restore some kind of social contract and consensus to bolster its legitimacy. Putin and his entourage have two options. One is to rely on conservative and extremist forces and seek to broaden their traditional support base among conservative layers of society. The other one is to respond to the demands for more democracy and political liberalisation and modernisation and, by doing so, open the political and economic system to the emerging middle class. In a series of articles on the national question, social policy and democracy, published in several big newspapers in January and February 2012, Putin presents a mix of ideas borrowing from both sides of the political spectrum. This makes it difficult to predict which way he will go. Whether or not the elections will be free, fair and clean, however, will already be an important indicator of Russia’s future development.