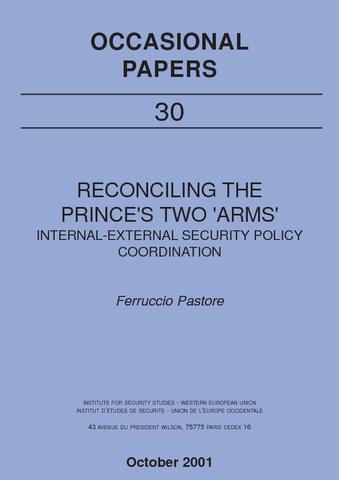 The blurring of the distinction between internal and external security, and the connected impulse towards better coordination between the correspondent policy fields, are among the fundamental structural changes in international relations that have occurred during the last decades. Such overall trends were accentuated and made particularly evident in Western Europe by progress in supranational integration. The gradual emergence of the EU as an area of freedom of circulation has fostered a common perception of internal security priorities and the intensification of technical and political cooperation in this area. In Western Europe, more than elsewhere, the ‘external’ (extra-EU) dimension of ‘internal security threats’ has been increasingly emphasised. Nevertheless, until very recently, surprisingly little attention has been given in the EU to the issue of internal-external security policy coordination. This paper analyses it from two distinct points of view. First [Ch. 2], the institutional dimension is tackled through an overview of the ongoing coordination efforts and the main shortcomings at the different levels of the EU decision-making structure. Subsequently [Ch. 3], the political dimension of internal-external security coordination is considered, mainly through the juxtaposition of the different approaches to European security which tend to prevail in the internal security policy community, on the one side, and in the ‘external relations’ community on the other. Such dualism is illustrated with particular reference to such a crucial test-case as border management in the framework of the enlargement process. Finally [Ch. 4], the prospects for the development of a ‘holistic’ approach to European security are briefly analysed.