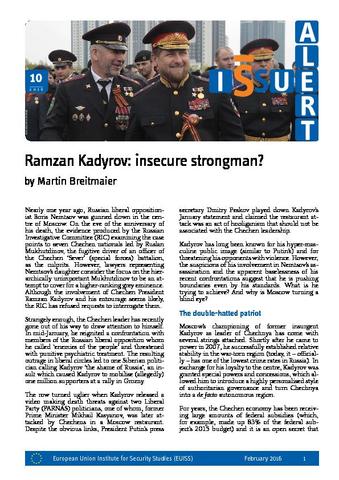 Nearly one year ago, Russian liberal oppositionist Boris Nemtsov was gunned down in the centre of Moscow. On the eve of the anniversary of his death, the evidence produced by the Russian Investigative Committee (RIC) examining the case points to seven Chechen nationals led by Ruslan Mukhutdinov, the fugitive driver of an officer of the Chechen ‘Sever’ (special forces) battalion, as the culprits. However, lawyers representing Nemtsov’s daughter consider the focus on the hierarchically unimportant Mukhutdinov to be an attempt to cover for a higher-ranking grey eminence. Although the involvement of Chechen President Ramzan Kadyrov and his entourage seems likely, the RIC has refused requests to interrogate them. Strangely enough, the Chechen leader has recently gone out of his way to draw attention to himself. In mid-January, he reignited a confrontation with members of the Russian liberal opposition whom he called ‘enemies of the people’ and threatened with punitive psychiatric treatment. The resulting outrage in liberal circles led to one Siberian politician calling Kadyrov ‘the shame of Russia’, an insult which caused Kadyrov to mobilise (allegedly) one million supporters at a rally in Grozny.