Putting the Copenhagen failure to a good use 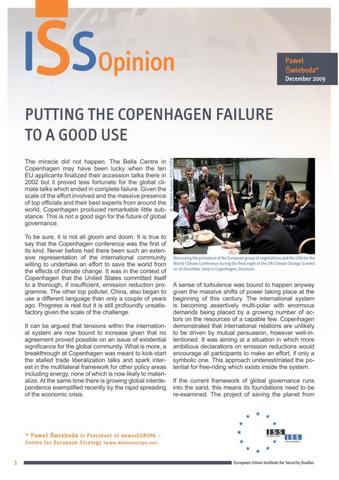 It is not all gloom and doom. The Copenhagen Summit was the first of its kind. Never before had the international community been so well represented in its willingness to engage in efforts to save the world from the effects of climate change. It was in the context of Copenhagen that the United States committed itself to a thorough - if insufficient - emissions reduction scheme. The other top polluter, China, also began to use a different language compared to only a couple of years ago. Progress has been made. But given the scale of the challenge, it is profoundly unsatisfactory.

The fact that no legally binding agreement proved possible on an issue of global existential significance is bound to increase tensions within the international community. What is more, the expected ‘Copenhagen miracle’ was meant to kick-start the stalled trade liberalisation talks and spark interest in a multilateral framework for other policy areas such as energy. None of these plans are now likely to materialise any time soon.