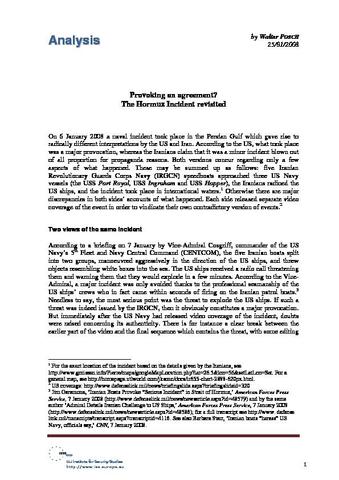 On 6 January 2008 a naval incident took place in the Persian Gulf which gave rise to radically different interpretations by the US and Iran. According to the US, what took place was a major provocation, whereas the Iranians claim that it was a minor incident blown out of all proportion for propaganda reasons. Both versions concur regarding only a few aspects of what happened. These may be summed up as follows: five Iranian Revolutionary Guards Corps Navy (IRGCN) speedboats approached three US Navy vessels (the USS Port Royal, USS Ingraham and USS Hopper), the Iranians radioed the US ships, and the incident took place in international waters.&nbsp; Otherwise there are major discrepancies in both sides’ accounts of what happened. Each side released separate video coverage of the event in order to vindicate their own contradictory version of events.
<b>Two views of the same incident</b>
According to a briefing on 7 January by Vice-Admiral Cosgriff, commander of the US Navy’s 5th Fleet and Navy Central Command (CENTCOM), the five Iranian boats split into two groups, manoeuvred aggressively in the direction of the US ships, and threw objects resembling white boxes into the sea. The US ships received a radio call threatening them and warning them that they would explode in a few minutes. According to the Vice-Admiral, a major incident was only avoided thanks to the professional seamanship of the US ships’ crews who in fact came within seconds of firing on the Iranian patrol boats.&nbsp; Needless to say, the most serious point was the threat to explode the US ships. If such a threat was indeed issued by the IRGCN, then it obviously constitutes a major provocation. But immediately after the US Navy had released video coverage of the incident, doubts were raised concerning its authenticity. There is for instance a clear break between the earlier part of the video and the final sequence which contains the threat, with some editing having been carried out in between.&nbsp;&nbsp; Furthermore, a week later the US played down the threat. It may not have come from the Iranian speedboats, perhaps it was radioed from another ship or from shore. One theory is that it may have emanated from a mysterious pirate radio operator called ‘Filipino Monkey’, who regularly broadcasts heckling abuse, obscenities and threats to crews cruising the Gulf.&nbsp; Also, the white boxes that were allegedly thrown into the sea and – as the Admiral insinuated – might have contained explosives, were never mentioned again. And finally, there was another detail missing in most of the reporting of the incident: the Iranian speedboats were unarmed, hence hardly a match for the three US vessels. If so, does the whole affair boil down to the proverbial ‘storm in a teacup’? Or just American psy-ops engineered so as to discredit Iran and to influence decision-makers around the world at a moment timed to coincide with President Bush’s visit to the Middle East?