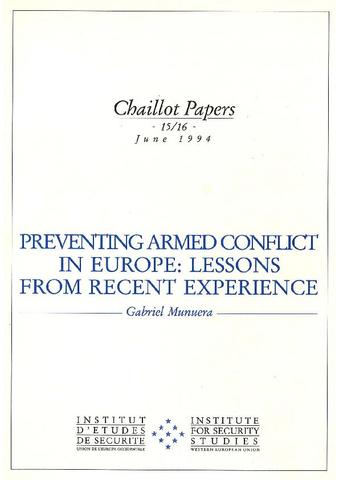 Gabriel Munuera joined the Institute as a research fellow in July 1993 and has since then devoted a good deal of his time to work connected with conflict prevention. This Chaillot Paper, which is the principal result of that work, was discussed in draft form at a meeting in the Institute on 17-18 March 1994 at which a number of those with first-hand experience of the work of the various international organizations discussed in this paper took part. Their comments were very much appreciated and were taken into account by Mr Munuera in this final version. The bulk of the work on the paper was completed by the end of April 1994, and it has not always been possible to take into account events that have occurred subsequently. Conflict prevention in Europe has been one of the major security challenges facing us in the post-Cold War period. This paper, which attempts, through examining case studies, to derive some general lessons will, we hope, make a useful contribution to the further debate on the subject. It is significantly longer than most of our Chaillot Papers and we are therefore issuing it exceptionally as a double paper.

Conflict prevention in the Balkans: case studies of Kosovo and the FYR of Macedonia