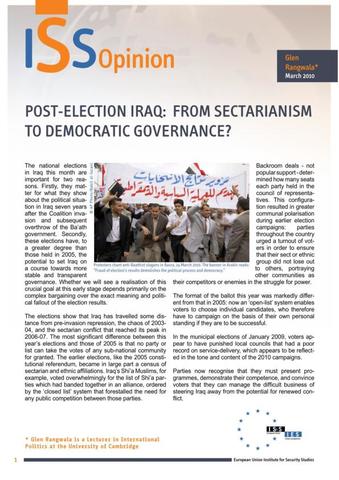 The national elections in Iraq this month are important for two reasons according to Glen Rangwala. Firstly, they matter for what they show about the political situation in Iraq seven years after the Coalition invasion and subsequent overthrow of the Ba’ath government. Secondly, these elections have, to a greater degree than those held in 2005, the potential to set Iraq on a course towards more stable and transparent governance. Whether we will see a realisation of this crucial goal at this early stage primarily depends on the complex bargaining over the exact meaning and political fallout of the election results.

But to what extent will these elections produce a government capable of transforming this situation? Can a party that wins a popular mandate use its legitimacy to push for the implementation of essential programmes? The signs are not promising, writes Rangwala, who says that the potential for the elections to lead to an effective government depends upon the inevitable complexity of post-election bargaining between rival groups.

The case for stronger EU engagement with post-election Iraq