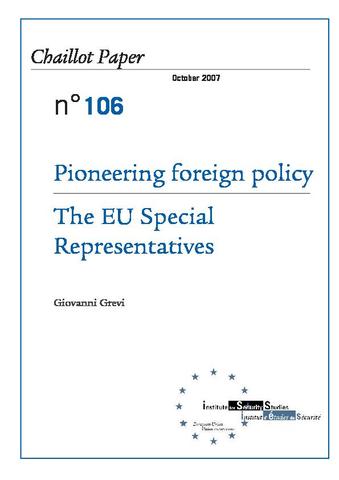 Over the last ten years, the EU Special Representatives (EUSRs) have pioneered EU foreign policy in countries and regions of direct interest to the Union. EUSRs are a face of the Union, enhancing its visibility, and they give it a voice, seeking to deliver a single message to local and international partners. In addition, they provide information and analysis from the field to EU decision-making bodies and they help coordinate the panoply of instruments that the EU deploys on the ground. In a permanent interaction with EU institutions and Member States, the EUSRs play therefore an important role in EU foreign policy. The function of the EUSRs has been developing in a relatively pragmatic, and not always effective, way. Their number has grown from two in 1996 to nine today, and their geographical scope and policy mandates have been steadily expanding. What are the main tasks of the EUSRs? How has their role evolved over time? How do the EUSRs fit and deliver within the EU institutional framework? This Chaillot Paper seeks to address these questions, and outlines some proposals on what could be done to enhance the performance of the EU Special Representatives.